Insights from the first UK Council to ‘Go Cloud’

We caught up with Rocco Labellarte, Head of Technology and Change Delivery, Royal Borough Windsor and Maidenhead, for an in-depth study of what public sector agencies should look for when rolling out a Cloud solution. Rocco is presenting a case study at Public Sector Cloud World Forum entitled First to the Cloud! Reflections on RWBM’s Journey to becoming the first UK Council to ‘Go Cloud’. Download the brochure here. Public Sector representatives can claim a complimentary pass, here.

Which opportunities, from your point of view, can cloud computing bring to the public sector?

The UK Government aims to drive down cost, improve efficiency and transform services with a Digital by Default choice. Significant savings will only start to flow when the public sector is able to challenge providers robustly, and their offerings can be compared like-for-like. This will grow as more Authorities move to the Cloud and share their collective experience. Transforming services will need much more than channel shift. Public sector delivery needs a complete overhaul to respond to the diverse and fast-changing demographic makeup of our country. By far the biggest opportunity, not yet centre-stage for local authorities, is that of simplifying through sharing solutions, moving from the parochial “we’ve always done it this way” to centres of excellence. Cloud computing, more than anything before, can enable this movement, if enough leaders across the public sector want to make it happen.

How does your organisation plan to leverage cloud computing in the next 12 months?

We have been recognised by GOV.UK as the first local authority in the UK to move fully into the Cloud. In eighteen months we have moved from a fully in-house maintained infrastructure to a Cloud computing environment with multiple providers of Infrastructure as a Service, Software as a Service. Having a more stable, resilient platform provides the foundation upon which to move toward Software as a Service solutions. The drivers are a major rationalisation of our massive software portfolio. We intend to reduce down from over 300 applications to a few dozen over the next 12 to 36 months. This will enable far greater control over the information we store, allowing us to provide far better access to that data both to individuals and through Open Data protocols. Equally importantly, SaaS will enable us to fully embrace Agile as a technique for continually improving the way we deliver our services. Finally, as more and more Authorities move to an “infrastructure-light” delivery model, the ability to share resources and services will take a big step forward.

What are the main steps in building success and managing failure in public sector cloud implementations?

Infinite time, infinite resource and infinite budget mean you should never fail to deliver a project. Building success means ensuring your plans take any constraints on those three factors into account and managing expectations accordingly. Then you need to factor in the people, the politics (with a small p) and changing priorities as these are the three most common variables that constantly affect your ability to deliver.

Why are you speaking at the Public Sector Cloud World Forum and what do you hope to get out from your time at the event?

Not for the first time, the Public Sector is under pressure to deliver more with less. Doubts about whether or not Cloud computing is achievable or even desirable are voiced all the time. Sharing experiences is one of the values that underpin working in Government and, having delivered our own Cloud strategy, I’m interested in sharing our own and other people’s experiences, so we can build a more comprehensive picture of how best to succeed. 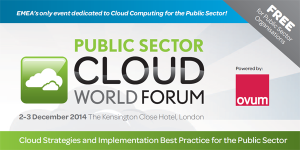 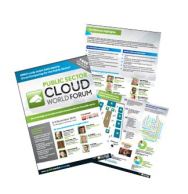 We are delighted to announce that the event brochure for the Public Sector Cloud World Forum is now available for you to view today!

Taking place in London between the 2-3 December this year, the Public Sector Cloud World Forum will look at Government insights into:

Esendex, a leading provider of mission-critical application-to-person SMS services to businesses, has now been accredited as an approved supplier on the G-Cloud 5 Framework. Their services are now available in the Cloud Store, the place to find cloud services approved by HM Government. Esendex has already had their first purchase through G-Cloud by a central government department.

G-Cloud is designed to benefit the public sector by providing a facility for public sector organisations to quickly and easily purchase cloud-based services.

“Delivering solutions to the public sector is an area in which we specialise in, so having been awarded a place on G-Cloud is a great achievement for us. We’re now able to expand our offering to our customers, meaning they can now buy our services without the time consuming and expensive procurement processes.”

Not only does this development bring SMS services to organisations quicker and at a lower procurement cost but it also contributes to the government’s “Digital by Default” initiative.

Writing on his blog, he said:

“It suggest to me that it’s job done, sit back, put your feet up. No, it is NOT business as usual, there is much to be done in transforming the way IT is not only bought but also consumed across the wider public sector.”

The UK cloud computing market is predicted to reach £6.1 billion by 2014 (source: TechMarketView) and offers big investment opportunities for companies in the ICT sector.

18% of UK small medium enterprises (SMEs) use cloud and a further 30% plan to use them in the next 12 months. 81% of established cloud users in the UK plan to increase cloud usage over the next 2 years.

Almost all software companies in the UK are using cloud. Opportunities exist in both the public and private sector for companies offering cloud or linked services.

The G-Cloud Programme is changing how the public sector buys and uses Information Technology (ICT). This means more opportunities for companies to access government contracts. It’s designed to support the purchase of cloud based services.

By 2015 half of all new ICT spending by the UK government will be on public cloud services through the G-Cloud programme. This provides new opportunities for overseas companies looking to enter the market.

The main reasons for businesses using cloud services in the UK are:

Small and medium sized UK companies are adopting cloud into their businesses which often gives them an advantage against competitors.

Opportunities exist across all the different models of cloud solutions, particularly the Software as a Service (SaaS) market, where applications are hosted by a vendor or service provider and made available to customers. Other areas include:

Many businesses are using software tools such as Salesforce automation and Customer Relationship Management (CRM) and these continue to grow in the UK market. Other related software in demand includes:

This month saw the publication of the business plan for the GDS which lays out the focus of its work up until this time next year.

The scope of its work pipeline is impressive in its ambition and potential impact.

In digitising the top 25 most important government services by its 2015 deadline the GDS estimates it will save £979m each year.

Meanwhile, from its G-Cloud programme, it estimates that if the current rate of spend continues it will realise annual savings of around £200m by March 2015.

After being subsumed into the GDS last year it is good to see that G-Cloud has not only retained focus around driving the cloud agenda in government but the extent to which, as a relatively small part of the GDS, it is able to show that there is a compelling commercial reason for government to continue to put cloud at the heart of what it does.

But of course, there is always more that can be done. As we head out of the first year of Cloud First, this year is a critical one in driving the cloud agenda in the public sector. With that in mind here are four areas I think Tony Singleton and his team should focus on:

1) Continue to provide vocal leadership around the role of G-Cloud – G-Cloud is maturing in terms of supplier numbers and spend but what is still missing are the higher value transactions which are vital if it is to be seen as the definitive framework for cloud services.

As larger value contracts come up for procurement in the year ahead it is vital that G-Cloud team acts as vocal cheerleaders from within government to ensure departments are aware of and use the framework. This will be particularly important as CloudStore gets incorporated into the Digital Marketplace later this year…

Total spending on cloud services through the UK government’s Cloud Store marketplace hit £192m at the end of May, up from £180m the previous month. But more than 85 per cent of this was accounted for by the UK government’s own spend, with the portal still failing to gain serious traction within the the wider public sector.

So far, £108.6m or 63.6 per cent of that sum has been spent with small and medium sized enterprises selling services on the Cloud Store, and £83m or 36.4 per cent with large enterprises and IT incumbents.

The latest figures suggest healthy growth rates for the procurement programme, which is just a few years old. In February this year total spending through G-Cloud approached $100m. March saw the highest growth rates with a registered total spend of £30.6m.

Last month UK Cabinet Office minister Francis Maude told an audience at a public sector procurement trade show in London that the G-Cloud programme has been successful at opening up the public sector market to SMEs.

“We know the best technology and digital ideas often come from small businesses, which is why we’ve created the G-Cloud framework… For both government and the companies listed on the CloudStore, this means less bureaucracy and less hassle,” Maude said.

But the latest figures also show the government is struggling to make the G-Cloud programme visible to the wider public sector and local government.

Educating the wider public sector is a key aspect of the government’s current bid to broaden and rebrand the Cloud Store into the Digital Marketplace, a single platform for buying digital technology which will include services sold through G-Cloud as well other procurement frameworks like the PSN.

In April G-Cloud head, chief operations officer and deputy director of operations for the Government Digital Service, Tony Singleton, said that the organisation will take a number of steps to educate buyers on, and increases awareness of, the G-Cloud programme.

“We need to ensure that everyone involved with IT both in central government and the wider public sector, fully understands the benefits of cloud technologies as well as how G-Cloud works and the benefits it offers,” he said.

Error: Twitter did not respond. Please wait a few minutes and refresh this page.