Read our guest blog from Gigaom, by David Meyer.

The analyst house certainly doesn’t want to overinflate expectations for overall telecoms revenues – growth there will be tiny at best over the next few years – but it does have high hopes for certain specific areas.

How are the next few years looking for telcos? Not so hot overall, according to a new forecast from Ovum. That said, the analysts do highlight one or two silver linings – the main one, by far, being mobile broadband.

First, a look at the overall picture. Ovum estimates that telecom industry revenues for 2012 will have totalled more than $2 trillion, which is up marginally from 2011′s $1.96 trillion, and capital expenditures should also be up from $314 billion in 2011 to more than $330 billion last year. Not stellar – that revenue growth is two percent, down from seven in 2011 – and in fact, the analyst house is warning that growth may flatline over the next five years.

However, Ovum also reckons that there’s significant growth to be had in specific sectors. Number one for the operators is mobile broadband – here, Ovum predicts a very healthy 19.2 percent compound annual growth rate between now and 2016, generating $123 billion in incremental revenue during that period.

This is important stuff to bear in mind as it colors the behavior of telcos, particularly when it comes to subjects such as net neutrality. A top-level chart of those forecasts:

We already know full well that mobile broadband revenues are in the growth phase. However, as Chetan Sharma pointed out last year, this too shall pass, and operators really need to lay the groundwork for the next stage. A stage that should really entail so-called over-the-top services.

Here’s where Ovum sounds a pretty big warning, albeit a mixed one:

“Over­-the-­top services such as digital music and mobile gaming are not compelling revenue opportunities for telcos. However, they are important for strategic reasons.”

Those strategic reasons appear to be around capturing market share, rather than actually, you know, making more money. Do the telcos really stand a chance in competing with nimbler upstarts such as WhatsApp and giants such as Apple that dominate other parts of the industry? I’ve expressed my skepticism pretty clearly on that one a number of times.

Another interesting growth area, Ovum suggests, is that of telcos’ public cloud services. Check out this chart: 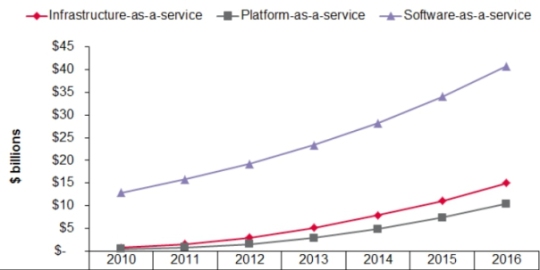 Software-as-a-service is the biggest opportunity – there, Ovum calculates $19 billion in revenues during 2012 and more than $40 billion in 2016. Remember that when we talk telco SaaS, we’re talking mostly enterprise-focused services such as unified communications, where the extra draw is the telco’s ability to provide private, secure access. Some service providers are also offering CRM applications and the like, often through partnerships.

Infrastructure-as-a-service and platform-as-a-service are smaller but growing faster. Overall, the analysts peg cloud as the fastest-growing new revenue opportunity for service providers, if smaller than mobile broadband. Exciting times, if the telcos manage to grab that opportunity.

Want to meet the cloud experts? The Telco Cloud World Forum returns with 70+ star speakers meeting in London next April! Click here to visit the website.